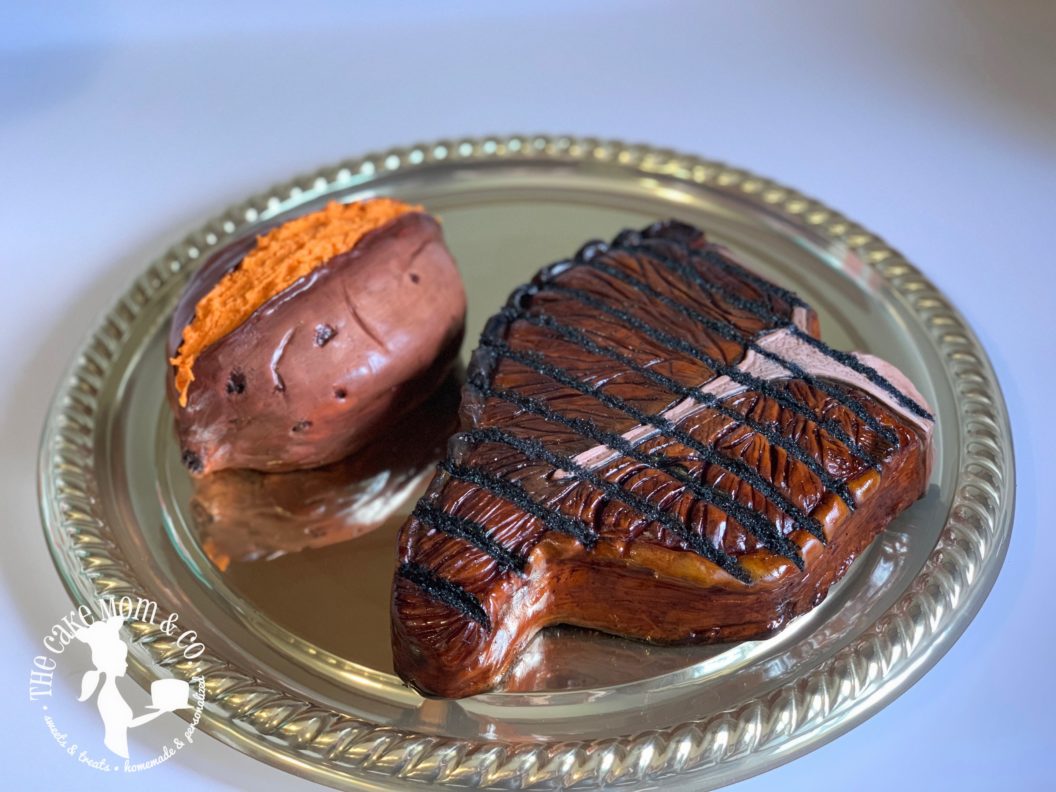 Over the weekend I entered my very first cake competition at the Show Me Sweets Cake & Cookie Convention in St. Louis, Missouri! As soon as I signed up online, my nerves started getting the best of me and I physically became nauseous for several days. I started to wonder why I would even attempt to enter a competition after seeing all the amazing cakes from the last show in 2018.

The category I was most interested in was the food realism category. The theme was to make a cake that looked like something a king would eat off the Royal Table.

But, I didn’t start making my food realism cake or even think I was going to get it made until the night before I left for the event! I randomly bought a gold plastic tray at Walmart the same week for $2.98, just in case I ever got around to actually making it. You see, my sculpted cake was taking FOREVER to finish, and I waited too late in the year to enter and start working. I didn’t even get to start on my tiered cake entry, which I still have plans to make just for fun!

My idea of what a king would eat was a large porterhouse steak, the king of all steaks. It’s the steak on the menu I can never afford, so of course a king would eat it! 🙂 I was mostly interested in the steak, and thought I might also try to add a side if I had the time. I ended up making a sweet potato to go with the steak the day I left for St. Louis. It wasn’t supposed to be a sweet potato, but once I put the modeling chocolate/fondant mixture onto the carved cake it didn’t want to cooperate and looked wrinkly. Since fondant was mixed in I couldn’t smooth out the wrinkles like you can with modeling chocolate. I was about to give up, when I remembered that when I cook a sweet potato it is usually wrinkled up a little.

The creation of the steak started by finding a nice steak shape online and printing it out as a template. I then used the printed template to cut out the same shape on a cake cardboard.

Once the cake cardboard was in the correct steak shape, I then used the cardboard to cut the shape out on the cake. I used an 8″ and 6″ cake to make the shape. I already had this cake on hand. If I were to make it again, I would have just baked a larger cake.

I covered the steak in modeling chocolate from Fondarific tinted a light brown color.

Here you can see where I started adding random lines to the cake to give it texture.I also added in the bone down the middle by just drawing lines on with my sugar shapers. I used my pointed end sugar shaper to add the holes to the bone like you would see on a real steak.

I used a skewer since it is a straight line, to add grill marks to the steak. I then had to go back over the lines with one of my sugar shaper tools to make the lines have more definition.

I used various shades of brown with ever clear and hand-painted on the color.

Here I added a little black to give some of the parts of the steak a grilled burnt look. You know, like what happens when I actually cook a steak! Some of the online steak photos were just a little too perfect for me, so I just added coloring where I thought it might burn just a little.

The shading took the most time. I really wanted it to be varying shades of brown and have the nice light fatty areas mixed with the burnt areas that can happen when a steak is grilled.

I painted the bone a lighter color, but then it almost got too dark. I finally had to go to bed and let the bone dry so that I could go a little lighter the next day. I ended up using a cotton swab to dab on white. Before any of that, I added little holes to the bone like what I saw in photos of the bone online. That gave it a nice texture and helped the darker color stay just a little.

Here is the almost finished steak with filled charcoal lines.

I used sugar tinted black to add charcoal to the grill line marks.I learned this tip from Sideserf Cakes Texas Steak CAKE video on Youtube! I love this whole video, and watched it several times as well before attempting the cake. She’s amazing!

I used Poppy Paint edible confectionery glaze to give the steak a juicy shine.

Silver is where my cake placed in the points on the score card. Silver was in the 3rd place category on the score card, with platinum being the highest. I didn’t end up placing with enough points for a big win.

I came home from St. Louis and was then told by Show Me Sweets that my cake did get the award for Best Interpretation of Theme for the Royal Table! Sadly, when I went to pick up my cake there was an award close by, but the way the papers and pictures were all over the table I thought the award belonged to the fish cake next to mine. So, I left my award on the table at the convention center, and I would assume the other cake owner thought it was theirs and took it home. 🙁

This themed cake was so much fun to create, and seeing all the other entries that looked just like food but were sugar or cake was amazing! I’m not sure yet if I will ever try another cake competition, but it was definitely a learning experience.