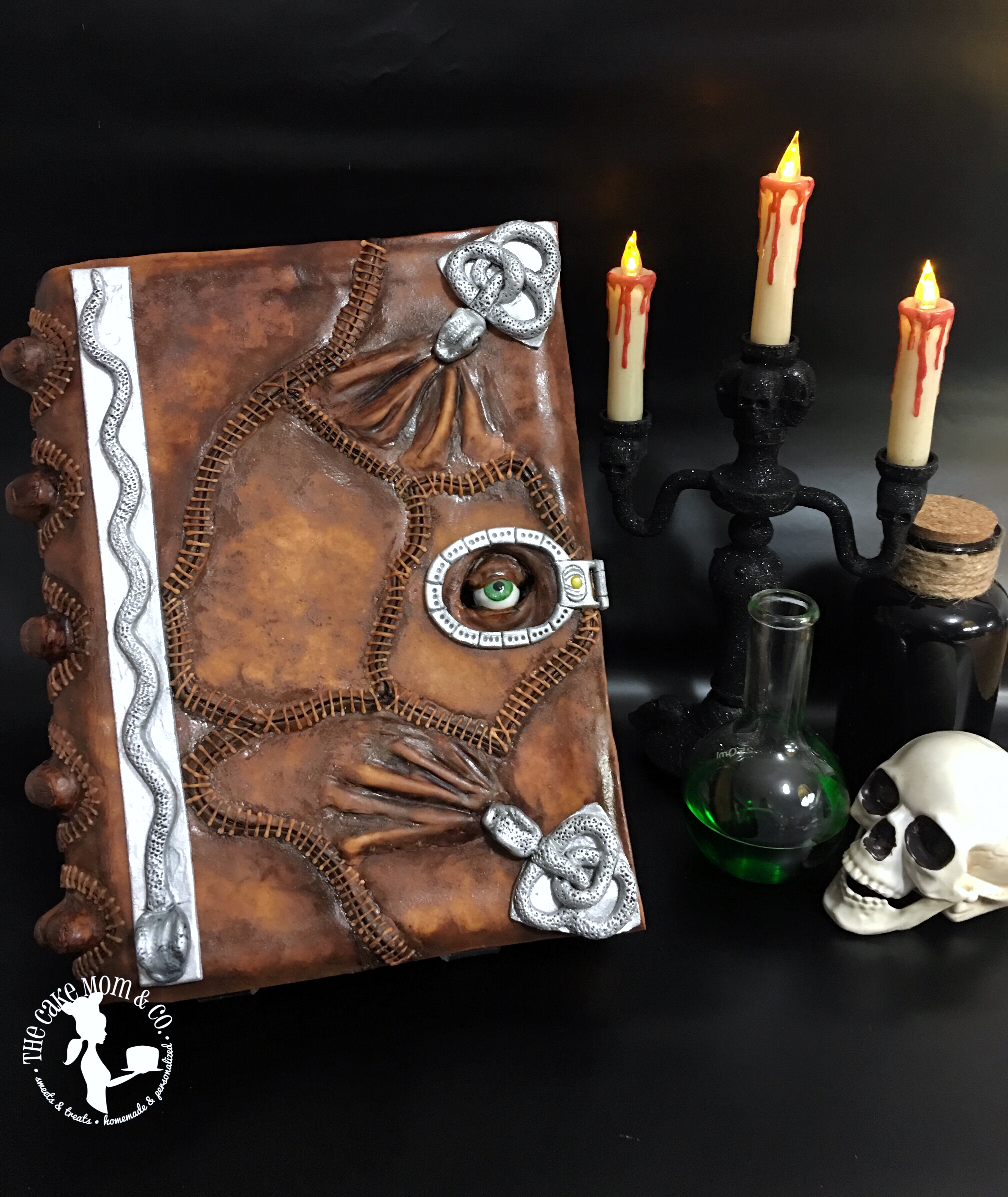 A few weeks ago while visiting my neighbor, she showed me her collection of Halloween decorations. Her prized possession is a book she purchased off of Etsy that is a replica of the spell-book from the movie ‘Hocus Pocus’. As soon as I saw the book I thought to myself that this would make a fantastic cake! My initial plan was to make the book and then surprise my neighbor with it, but then she went out of town. So I had the sheet cake frozen in my freezer and kept putting it off. A week later I just decided to unfreeze the cake and go for it, with no plans for anyone to actually eat the cake, but for me to test myself to see what I could create.

I was recently inspired by a cake artist I found on YouTube who creates cakes that stand and that you can hold. She creates structures out of foam core and wood. I decided to make a structure for my cake out of thick foam core that would allow me to hold the cake just like a book and even prop it up. I measured and then hot glued the foam core together so that 3 sides were together and one was open for cutting the cake. At this point I then covered it with aluminum foil. Not sure if that would be the correct method for food safety, but no one was eating this one. So maybe research that if you intend on making a similar cake. 😉 After the cake was in the structure, I needed the corners of the structure to be rounded like a book. I used modeling chocolate to create the corners. Next, I put the cake in the fridge for 2 days and procrastinated. 🙂 After downloading some audio books to binge on, I started covering the cake in fondant and made the snakes to go on top. The next steps were really fun. I shaped fingers and the lines for where the skin on the book come together out of modeling chocolate. I made the latch and eye and then sat all of the decorations aside. My favorite part was coloring the cake and adding the details. I used a sponge to dab on the food coloring in varying shades of tan and brown. The stitches were made with a tan colored royal icing, that I then hand painted.

Somewhere in there is also when I stopped taking progress photos of the cake. So here are the final shots of the finished cake. I realized I had zero Halloween decorations, so I went to Michael’s (the craft store), and purchased some props. The cake needed a proper photo session with some spooky accents. I even made “potion” out of water and food coloring.

At first I took a few photos of the cake laying flat. I thought I better have a few photos of it before placing it on my stand. My heart was pounding after I sat the cake upright, but it sat there perfectly! The cake is now at home on my counter where it will probably set until I can come to terms with having to throw it away. 🙁